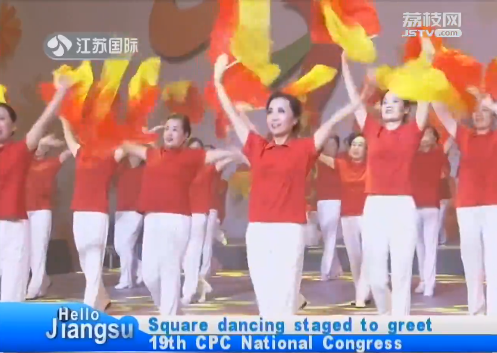 An award-giving ceremony was held Thursday in Nanjing for the winners of a square dancing contest staged to greet the upcoming 19th CPC National Congress.

Wang Yanwen, head of the publicity department, attended the ceremony and handed out the awards to the winners.

The square dancing contest registered some 150000 participants of over 5000 teams from the 13 prefectural cities across the province.

The square dancing contest has therefore become the largest of its kind in the province as the local people are encouraged to take part in fitness exercises and other outdoor cultural events.

26 teams entered the provincial final after the preliminary and qualifying rounds in the local regions. Six teams were given the first prize awards.

The 19th National Congress of the Communist Party of China is scheduled to convene on Oct. 18 in Beijing.

The 19th CPC National Congress will review the Party's work over the past five years and summarize precious experiences that the Party has gained from the historical process of uniting and leading people of all ethnic groups to carry on and advance socialism with Chinese characteristics under the leadership of the CPC Central Committee with Xi at the core since the 18th CPC National Congress.