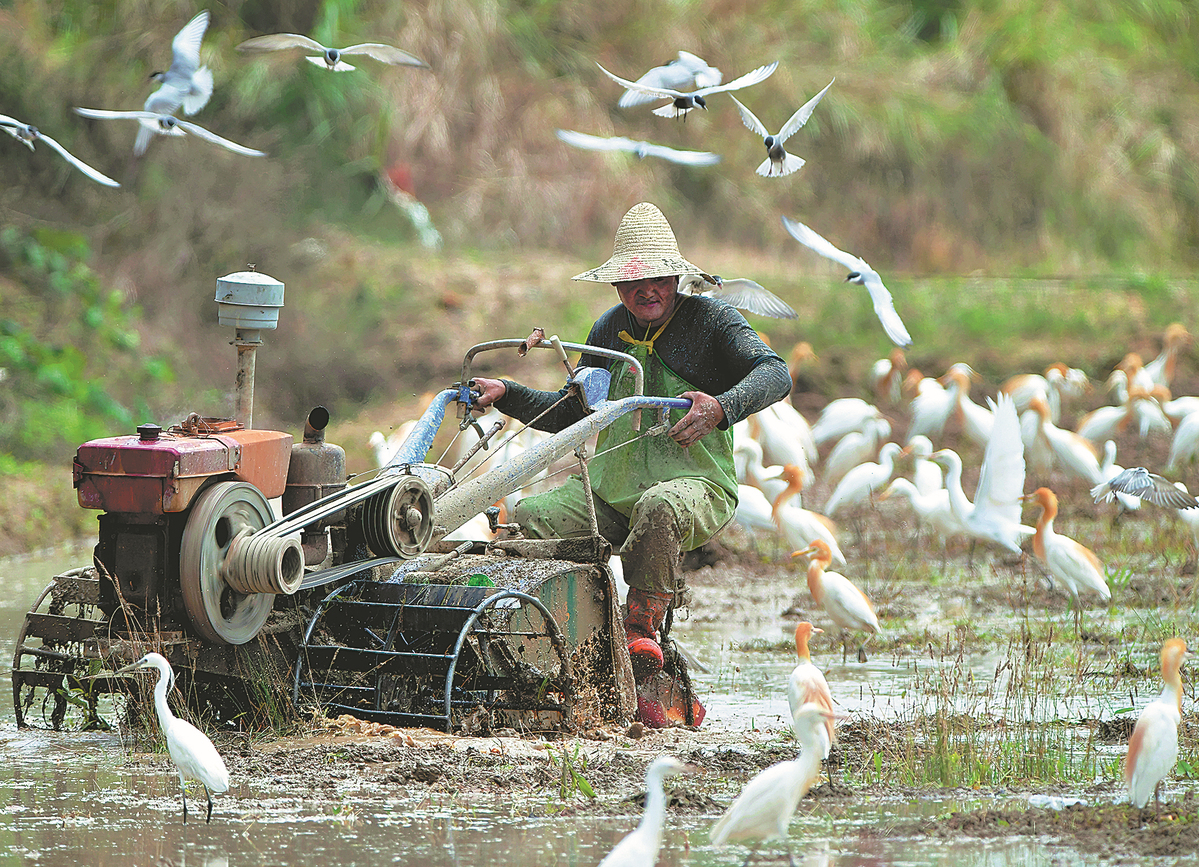 A farmer plows a rice paddy while egrets forage in Lianjiang county, Fujian province, on May 29. The province has been sparing no efforts to boost the eco-transformation of the region through systematic protection and restoration of forests, wetlands, grasslands and croplands. XINHUA

President Xi Jinping has called for the whole of society to engage in action to promote and practice the philosophy of ecological civilization, as China endeavors to achieve a comprehensive green transition toward a clean and beautiful world.

The natural environment provides the very foundation for human survival and development, and having a sound natural environment is the common wish of people of all countries, Xi said in a congratulatory letter to a national celebration event on Sunday marking World Environment Day.

Since the 18th National Congress of the Communist Party of China in 2012, China has emphasized that the strategy of building an ecological civilization is vitally important to the sustainable development of the Chinese nation, said Xi, who is also general secretary of the CPC Central Committee.

The country has made concrete steps toward building a beautiful China, he said, adding that "historical, transformative and comprehensive" changes have been achieved.

With the intensified endeavor to promote a comprehensive green transition of economic and social development, China will devote more efforts to pollution control, ecological conservation and tackling of climate change to build a beautiful China and to help build a clean and beautiful world, Xi said.

World Environment Day, observed each year on June 5, was also designated a national environment day for China in 2014 when the National People's Congress, the country's top legislature, adopted an amendment to the Environmental Protection Law.

This year, on the theme of "Building together a clean and beautiful world", the celebratory event was held on Sunday in Shenyang, the capital of Liaoning province.

Addressing the opening ceremony, Vice-Premier Han Zheng called for upholding the concept of "a community of life for man and nature" and promoting public awareness so that all Chinese citizens take action to build a beautiful China.

He said continued efforts should be made to address acute environmental problems at people's doorsteps, and the security of energy, grain supply, the industrial supply chain and people's normal lives must be ensured when the country endeavors to cut its carbon emissions.

Han underscored the need for global cooperation on green transition and to make the philosophy of ecological civilization and its practices benefit people around the world.

Minister of Ecology and Environment Huang Runqiu said that while forging ahead with the domestic green transition, China will proactively participate in global environmental governance with intensified international cooperation.

Via video link on Sunday, Elizabeth Maruma Mrema, executive secretary of the United Nations Convention on Biological Diversity, lauded China's great efforts and achievements on green transition. She said that China has taken a series of important measures and demonstrated leadership in mainstreaming biodiversity.

"I would like to call upon all to act and act now, as the challenges we face are huge and urgent," she said. "I also look forward to China's continued leadership and efforts in addressing environmental issues at various levels."