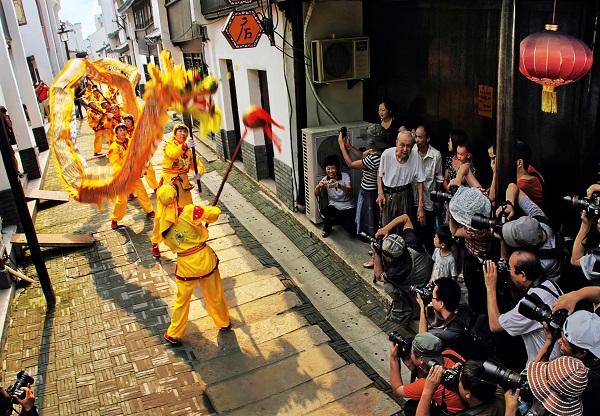 The Dragon Boat Festival, also called the Duanwu Festival, is celebrated on the fifth day of the fifth month of the Chinese lunar calendar, which is June 25 this year.

Locals in Wuxi are accustomed to having rice dumplings for breakfast. The rice dumpling is often called zongzi during the Dragon Boat Festival and consists of sticky rice and other ingredients, such as pork and sweet dates, wrapped in bamboo leaves.

Some people hang wormwood or acorus calamus on the door, also known as aiqi or aijian, to protect themselves from evil spirits. Others use wormwood to fumigate, sterilize and disinfect chambers.

The Dragon Boat Festival was established in remembrance of Qu Yuan, a ministerial scholar and patriotic poet of the state of Chu during the Warring States period (475-221 BC).

Qu Yuan, who died by committing suicide in the Miluo River, was known as a good man. Shortly after he died, the local people, at the time of the event, threw food into the water to distract, and feed, the fish from eating Qu Yuan's body. They also sat on long, narrow paddle boats, known as dragon boats, making sound to scare away the fish.

Wuxi has a long history of hosting dragon boat races and staging dragon dance performances every Dragon Boat Festival. Dragon boat racing was popular in the period of the Ming (1368-1644) and Qing (1644-1911) dynasties. This tradition is still in practice today, with all the attendant excitement. Now, Huangbudun in Liangxi district and Swan Lake in Dangkou town have become boat racing destinations.