Wu Zhenglong, Governor of Jiangsu province, presided over a provincial government executive meeting on Tuesday to study the current status of forestalling risks and maintaining stability and covey the gist of the national teleconference on the country’s financial situation. 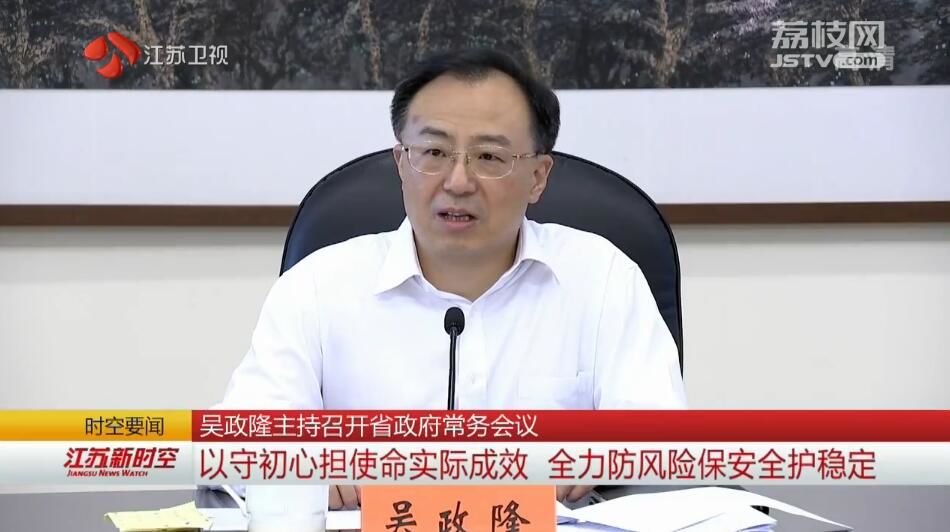 The participants studied the important instructions made by General Secretary Xi Jinping on preventing and resolving major risks and strengthening production safety.

It is pointed out that maintaining social security and stability is the overriding primary political task, an important test of the progress of the theme education of staying true to the Party’s founding mission and a major test of the spirit of struggle.

It is urged that the province should follow the Xi Jinping Thought on socialism with Chinese characteristics for the new era and carry out the instructions made by General Secretary Xi Jinping and the decisions made by the provincial party committee and the provincial government by enhancing political stance, upholding bottom line thinking, strengthening risk awareness and shouldering the political responsibility of forestalling risks and maintaining stability so as to make steady progress while securing stability in all aspects of the work.

Measures should be taken to sort out and forestall various kinds of risks and latent hazards by adhering to the bottom line thinking, enhancing the sense of mission, strengthening the spirit of struggle and staying true to the party’s founding mission to create a good environment for the celebration of the 70th anniversary of the founding of New China, according to a statement released after the meeting.

Since the beginning of this year, Jiangsu has always placed stable financial and anti-risk positions in a prominent position, and promoted financial reform and development in a coordinated manner so that its financial work has achieved positive results, the statement said.

The current downward pressure on the economy has increased, and there are still many uncertain factors affecting financial stability, according to the statement.

It is important to carry out in-depth study of the important instructions made by General Secretary Xi Jinping and the requirements made by Premier Li Keqiang and Vice Premier Liu He on the current status of financial situation, the statement said.

The meeting also called on the province to improve the services for brick-and-mortar economy by helping the enterprises to solve the difficulties and the costs of financing while continue to boost the reform on the financial sector by taking advantage of the construction of the pilot free trade zone in Jiangsu.

Departments and regional governments should deliver more targeted efforts to ensure the economy runs within an appropriate range, the statement said.