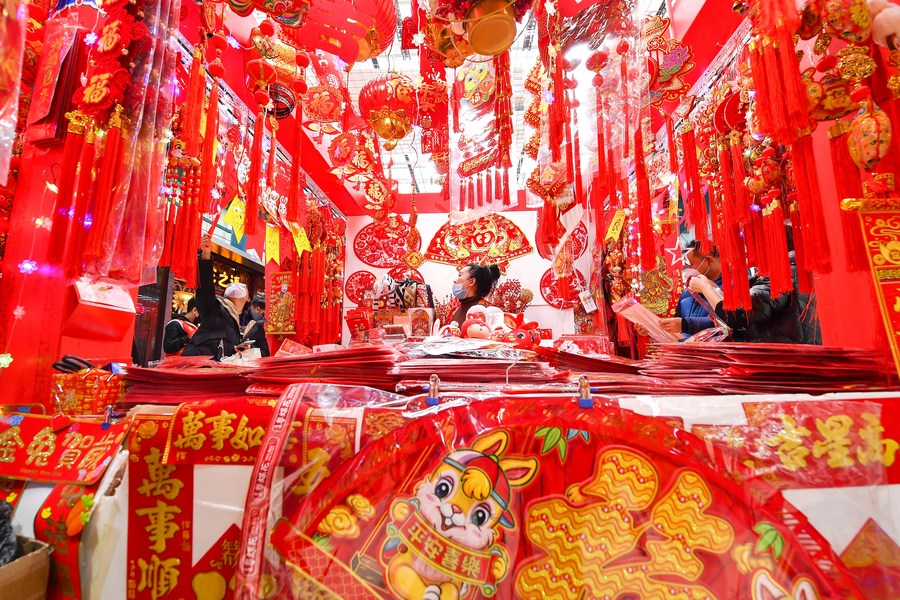 A happy holiday feast for Chinese amid global inflation woes -- how?

* While high inflation has weighed upon many countries and regions since the beginning of 2022, China's prices of food and energy have remained generally stable throughout the year and ahead of the Spring Festival, making a warm and hearty lunar new year meal possible.

* One major underpinning of China's stable prices is the country's solid grain supply in 2022, when its grain output recorded a new high, marking the eighth consecutive year of a grain harvest topping 650 billion kg.

* As a major energy consumer and importer, China has managed to cope with pressure in keeping the energy market stable by beefing up supply and coordinating demands.

* The country also has several effective supply and price management mechanisms in place, such as holding city mayors accountable for a full, affordable "vegetable basket."

The festive mood has been high across China during the Spring Festival, the grandest holiday for the Chinese, with more family reunions expected after a new COVID-19 response policy.

This year's Spring Festival, or the Chinese Lunar New Year, falls on Jan. 22. Among all the festival traditions, the feast on the eve of the Spring Festival, featuring a family gathering and sumptuous dishes, is one highlight occasion.

Luan Qing, a 71-year-old woman in east China's Shandong Province, is eager to see her children and their family. She started preparing for the big meal two weeks ahead.

"The price of pork, ribs, and eggs dropped compared with a month ago, and that of most vegetables gained a little, a normal uptick near the Spring Festival," Luan said. "I would say all prices are within reasonable ranges."

Ensuring a hearty and affordable holiday feast for Chinese like Luan is no easy feat and should not be taken for granted. Inflation has been high in many parts of the world in 2022.

In June 2022, U.S. consumer prices soared 9.1 percent compared with a year earlier, the biggest yearly increase since 1981. In October 2022, annual inflation in the euro area climbed to 10.6 percent, a record high.

Throughout 2022 however, China's Consumer Price Index saw its monthly growth rate float between 0.9 percent and 2.8 percent. The index rose 2 percent annually, well within its target range of around 3 percent.

The Chinese CPI's sub-index for food rose 2.8 percent year on year in 2022, much lower than the approximately 10 percent increase in the U.S. and the euro area.

"Globally, the inflation is high, while domestically, prices stayed stable," said Wan Jinsong, head of the price department of the National Development and Reform Commission (NDRC). "The contrast has been stark."

People buy vegetables at a market in Chaoyang District in Beijing, capital of China, May 13, 2022. (Xinhua/Li Xin)

One major underpinning of China's stable prices is the country's solid grain supply.

International wheat and corn prices saw monthly spike as much as 74 percent and 36 percent year on year, but the retail price of rice in China's 36 major cities slipped 1 percent over one year ago, and the retail price of flour gained only 3 percent.

"The bumper harvest in 2022 has helped to keep overall economic stability and major economic indicators running within a reasonable range," said Wang Guirong, a senior official with the National Bureau of Statistics. "It also has made positive contributions to stabilizing the global food market and food security."

The supply and prices of other food have stayed stable ahead of the Spring Festival. January will see an increase of over 600,000 tonnes in vegetable supply from December, according to the country's agriculture and rural affairs ministry.

The country's continuous opening-up has also enriched the Spring Festival holiday food at lower costs. For example, China cut the tariff for frozen blue cod, cashew nuts, and other food starting from Jan. 1, a move to cater to the increasingly affluent Chinese consumers' diversifying taste. 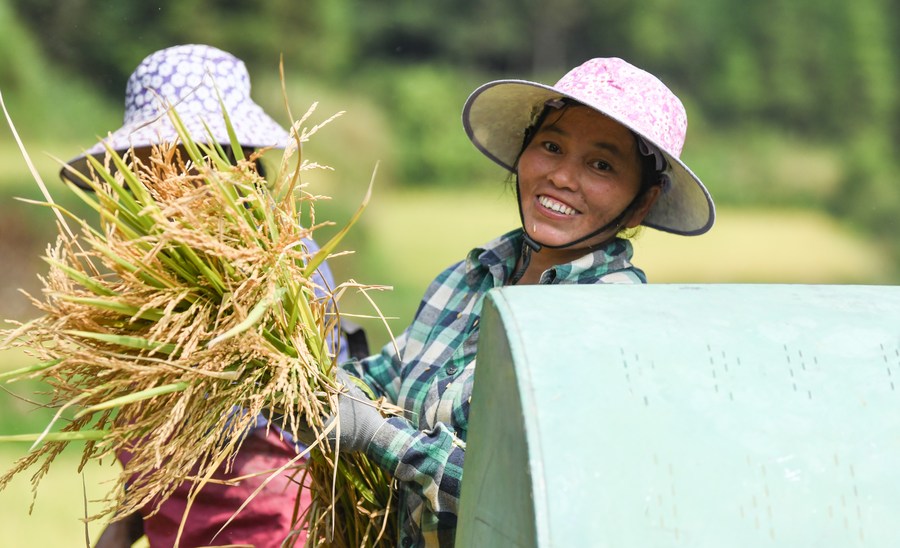 In the first 11 months of 2022, the U.S. and euro area saw the energy price in their inflation index up 27 percent and 38 percent year on year. However, the equivalent in China's inflation indicator only rose about 3 percent.

As a major energy consumer and importer, China has managed to cope with pressure in keeping the energy market stable by beefing up supply and coordinating demands.

The country consolidated the supply and price of coal, its energy mainstay, in 2022, with output climbing 8 percent year on year. Its crude oil output rose to over 200 million tonnes, while natural gas production saw an increase of over 10 billion cubic meters for six consecutive years.

China has sufficient energy reserve and management mechanisms to help cope with peaks in energy use amid cold waves and the Spring Festival holiday, according to Lian Weiliang, NDRC deputy director.

"Even in extreme cases, when residents' energy needs exceed expectations, we can activate the emergency plan to prioritize residential energy use to ensure that the people's livelihoods are not affected," Lian said. 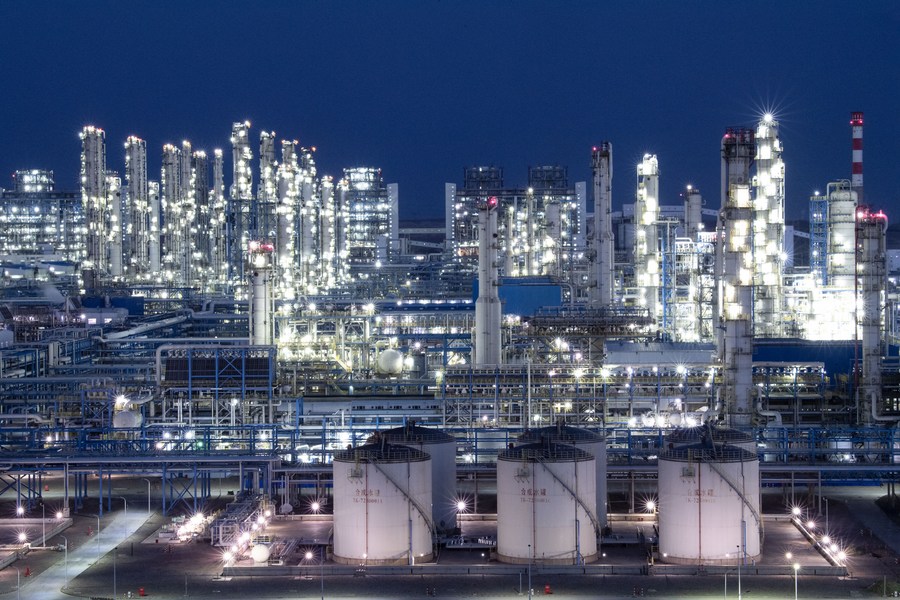 Boosting the supply of food and energy is just part of the country's combined efforts to keep prices stable. An array of government adjusters have been set in place to keep market forces on course.

The country also has several effective supply and price management mechanisms, such as holding city mayors accountable for a full, affordable "vegetable basket." 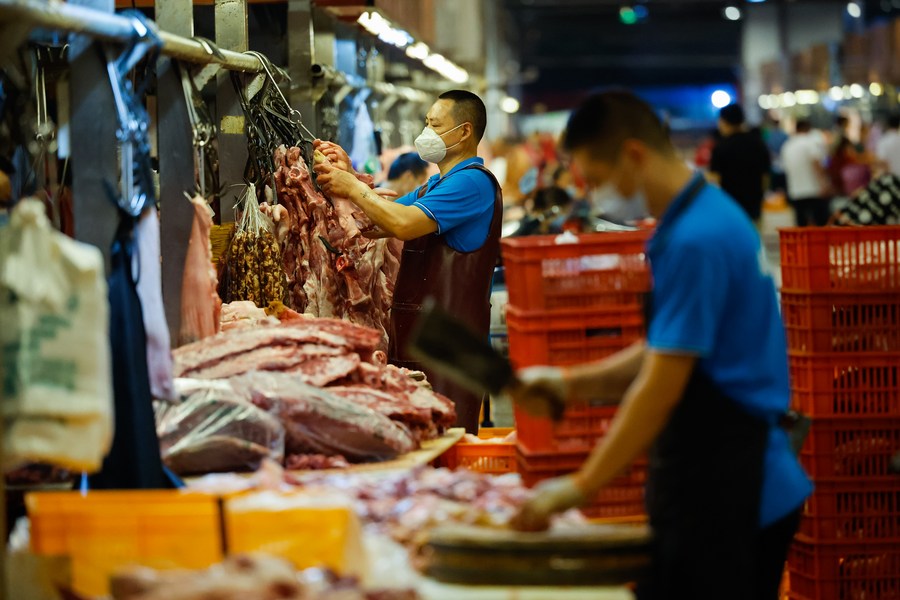