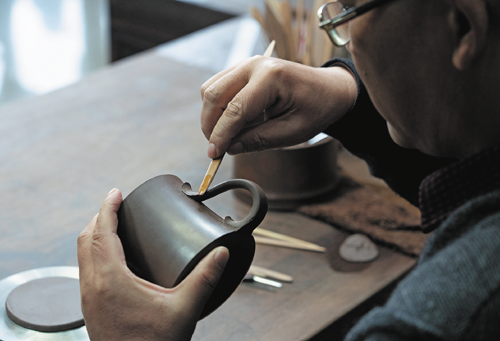 Masters of the purple clay

Whether your favorite tea tipple is colored green or black, the receptacle that is perfect for pouring it from may well be purple or some other color.

For that is the color of the teapots produced in the city of Yixing, Jiangsu province, known all over China for its production of its exquisite ceramic wares.

Thousands of craftsmen and women make these unglazed ceramic teapots, known as Zisha pots, in studios, factories and boutiques throughout the city.

No one seems to know exactly how many teapots and cups are produced in Yixing, but in any case it is often a figure of a very different kind relating to this purple ware that makes the headlines in China: its price. At an auction in Beijing in 2015, for example, a 10-piece purple clay tea set made by the artisan Gu Jingzhou set a record for the price of such art, fetching 92 million yuan ($14.3 million).

Made from clay taken from local rock mines, Yixing purple clay teapots, named of course after their signature color, are largely handmade.

Craftsmen and women spend years learning to press wet clay into a perfect flat piece, before turning it into a pot. The few tools they use include spatulas, small hammers and needles made of bamboo, wood or steel.

Craftspeople in Yixing often sell their own creations. Although the best of them, 30 of whom are recognized as national masters of purple clay art, often have their works sold for millions of yuan, the local trade union, like others in the dark on the matter, says it is impossible to put a figure on teapot sales.

Yixing, more than 2,000 years old, is in the center of the Yangtze River Delta, on the western bank of Lake Taihu, and is a county-level city of Wuxi city. It has a rich cultural heritage, nurturing many renowned academics, authors and artists, and became a ceramics center just 600 years ago.

That was with the founding of the Ming Dynasty (1368-1644), says Zhou Xiaodong, director of the Yixing Ceramics Museum.

The first Ming emperor made Nanjing the dynasty's capital, and the ambitious new rulers began building up the economies especially in nearby cities such as Yixing. The city began to specialize in producing pottery and ceramics, at first to meet burgeoning demand from the capital.

"Hard-pressed tea was replaced by loose leaves, and people no longer boiled the tea on the stove, but simply poured hot water into the pot and let it brew."

The teapot thus took on greater significance in China's tea drinking culture, and artisans in Yixing began to make names for themselves with their creations.

After the clay is baked it becomes waterproof ceramic, but is porous, allowing air in. This helps to maintain the aroma of the Chinese tea, and it keeps its color and taste for a long time.

"For centuries tea drinking has been an important part of Chinese culture," Zhou says.

The fine-crafted teapots of Yixing became widely sought after by the literati and the wealthy. Some names of the finest teapot artisans, such as Shi Dabin (1573-1648), Chen Mingyuan (born about 1680) and Shao Daheng (1796-1861), as well as their creations have endured long after they passed on.

A renowned ceramics maker of more recent vintage was Gu Jingzhou (1915-1996), 30 of whose pots and tea sets fetched more than 10 million yuan each in the auction market over the past decade.

Gu was one of seven master artisans in the 1950s recruited by the Yixing authorities to train new generations of purple clay ceramics artisans. Now the seven－six men and a woman－are widely known as the "seven great masters of purple clay".

Today there are 30 master artisans in Yixing who have been granted the title of national master of purple clay art, and more than 100 craftspeople have been recognized as "masters of Jiangsu province".

These craftspeople incarnate the artisanal skills of previous generations, applying contemporary touches to their wares with the help of technology such as digital design and 3D printing.

One of them is Fan Weiqun, 51, the fourth generation in a family of purple clay craftsmen, whose studio is in the same building as Dasheng Art Museum, where the achievements of his forebears are on display.

Dasheng was an artistic name of Fan Guangshan (1847-1902). When his fame rose as a purple clay teapot maker it was said that not even 1,000 taels of gold would be enough to secure a Dasheng teapot. His son Fan Qinren (1875-1941) inherited the name Dasheng and took the name to a higher level, his creations being displayed in exhibitions in the United States and Europe, and winning gold medals.

When Fan Weiqun was a child the handicraft of teapot making had more or less been forgotten in the family, he said. Only one pot had survived and "we saw it only during Lunar New Year, when my father would use it to make tea", he says, sitting in his studio, pouring tea for visitors from a pot of his own making.

In 1984 Fan's parents agreed to lend that heirloom teapot to the Yixing purple clay factory, whose director paid back the favor by recruiting the young man to work as a young apprentice.

"It was the right time, the first few years of China's reform and opening-up," Fan says.

"Soon wealthy customers from Hong Kong and Taiwan were coming to the city and ordering purple clay teapots and paying as much as hundreds and even tens of thousands of yuan."

Then came purple clay aficionados from other countries such as South Korea and Japan, who have the same cultural thirst for the tea drinking tradition.

This increasing new demand inspired Yixing to put an effort into developing its purple clay industry. Senior artisans and master artists were invited to train young workers such as Fan, and special workshops were set up to producing objects for export.

"My work was so good that my teapots were exempted from inspection, and that made me really proud. I was inspired by this sense of honor, and my skills rapidly improved."

Fan and many artisans of his generation gradually won recognition, their works figuring in exhibitions at home and abroad, and many, including Fan Weiqun, set up their own studios. Since then he has devoted a lot of time to collecting all the Dasheng teapots, the creation of his ancestors.

In 2005 he founded Dasheng Art Museum, presenting these teapots, sculptures and objects that tell much about his family history, and the dedication of generation after generation to the purple clay.

"In my family each generation carries on with the work of the previous one and contributes something new."

While teapot making is still purely handiwork, done with simple tools such as spatulas and needles of bamboo or steel, Fan and other artisans are ready to use the latest technology in their work.

"These can help you have a better perception of the dimensions and forms before they were made into clay," he says. "The practice, heritage and skills are never lost."