As a major part of the Meili Cultural Town project, the newly-opened block attracted about 1 billion yuan ($152 million) in investment to cover an area of 7.5 hectares. The construction was spread over two years and was finished in November.

Located in Meicun town, the central area of the famous erhu production base, the block includes nine theme squares carrying the context of Wu culture. Over 240 shopping and dining brands were introduced to the block, making it an ideal place to enjoy shopping, eating, experiencing local culture, and hanging out with family. 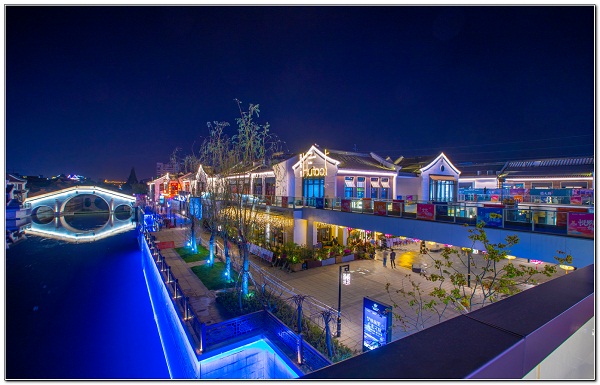 A night view of the newly-opened commercial and cultural block of Meili Ancient Town. [Photo by Shen Shenghua/provided to chinadaily.com.cn]

As the birthplace of the Wu culture, the Meicun town of Xinwu district has a history that can be traced back 3,200 years.

At the end of the 11th century BC, prince Taibo together with one of his brothers, went to Meili, or today's Meicun town in Xinwu district, and founded the Wu state, developing the economy and culture to the south of the Yangtze River.

Thus Taibo was named the architect of the Wu culture. For the following thousands of years, the Wu culture, which values morality, literature, pragmatism and innovation and has been passed down for generations, has brought prosperity to the region.

Cui Rongguo, acting head of Xinwu district, said that the Wu culture has given rise to people in Xinwu. The new block is expected to show the culture of Xinwu district and become a new and worth-visiting tourist attraction.