A cultural feast demonstrates the whole diversity and development of traditional art.

The 2020 Chinese Opera Gala (Kunshan) opened in Kunshan, East China's Jiangsu province, the birthplace of Kunqu Opera, on Oct 11. Over the coming month, 129 highlights from 116 Chinese operas from across the country will be staged in Kunshan.

Li Qun, vice-minister of the Ministry of Culture and Tourism, said in his opening speech that this year marks the end of the 13th Five-Year Plan and the completion of a well-off society in all respects. The gala creates a vibrant artistic atmosphere amidst the decisive victory in an all-round well-off society. He hopes that the majority of literary and art workers will create more excellent works.

On the opening day, the Xiamen Gezai Opera Research Center performed a live Gezai Opera Overseas Correspondence. This sees artists recreate the correspondence between overseas Chinese and their hometown in the early years of their absence.

Gezai Opera, also known as Xiang Opera, is among the first batch of national intangible cultural heritages, which are widely popular in Fujian province, Taiwan and in overseas Chinese settlements. The correspondence invokes nostalgia and symbolizes the dreams and anxieties of overseas Chinese from southern Fujian.

The Hubei Provincial Department of Culture and Tourism organized a total of seven Hubei local opera highlights, including the Yun Opera The Legend of the White Snake.

This is one of the four major folk love legends. It is the love story between male human Xu Xian and female snake spirit Bai Suzhen.

As the leading actors of this opera, it is not the first time that "Bai Suzhen" Liu Jingjing and "Xu Xian" Chen Pengju have performed together. As a new force on the stage of Yun Opera, the two have performed in Yun Opera Old Events in Junzhou and other repertoires. Even so, when co-starring The Legend of the White Snake: Tour of the Lake, it is still quite a challenge for Chen to play Xu Xian. Chen decided to learn from other versions of White Snake to get inspiration.

Hard work pays off. In the performance, The Legend of the White Snake: Tour of the Lake was the first opera excerpt to be unveiled, and was well received by the audience.

This is the third consecutive year that the Chinese Opera Gala has been held in Kunshan, and it is also its closing year. The goal is to use three years to gather all the existing types of 348 Chinese operas to be performed in Kunshan.

Wu Xinming, secretary of the Kunshan Municipal Party Committee, said in his speech that in recent years, Kunshan has comprehensively promoted the creative transformation and innovative development of traditional culture, especially around "polishing the cultural 'golden card' of Kunqu Opera, the 'ancestor of the hundred operas'".

This year coincides with the fifth anniversary of the Kunshan Contemporary Kunqu Opera Company. Qu Qixia, secretary of the Party branch of the company, said, "in order to achieve better development in traditional operas, new explorations must be made in talent transmission and repertoire innovation". 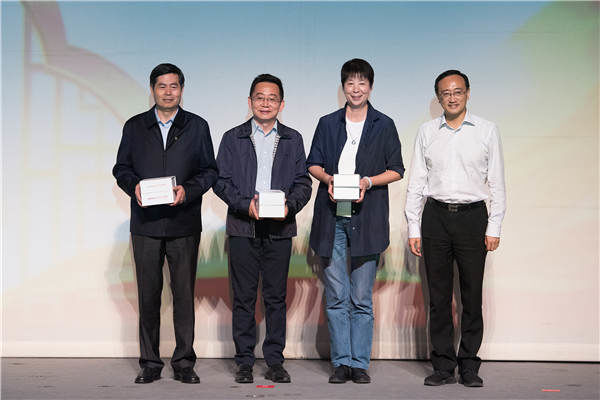 They have brought Kuqu Opera on stage for the gala in an attempt to cultivate young audiences. Imitator is an original Kunqu Opera that has been carefully created by Kunshan Contemporary Kunqu Opera Company for three years. The main creative team comprises of young talents from the company, including Huang Zhuyu, an outstanding actor, one of the promoters, leading actors and screenwriters of the play.

Cai Zhixiong, an 80-year-old opera aficionado from Chengdu, Sichuan province, rushed to Kunshan despite the long distance. He bought a 38-day pass and said that he and his wife will watch all the remaining plays this year.

It is hailed by experts as "an unprecedented and landmark event in the history of Chinese opera culture". This year's gala is keen on showcasing the remaining 116 dramas in performances, involving 25 provinces, as well as Hong Kong, Macao and Taiwan. It is planned to perform 19 grand dramas (including one grand opera from Guangdong, Hong Kong and Macao), 20 opera highlights, and a finale featuring all operas.