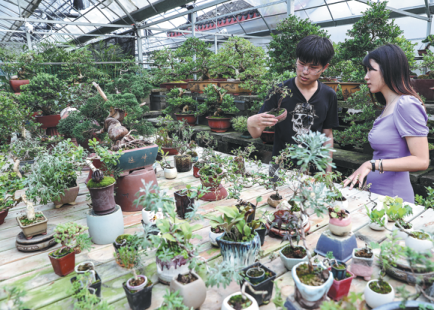 Money grows on trees for bonsai farmers in Jiangsu

Customers examine a bonsai plant in a market for flowers and trees in Rugao, Jiangsu province. [Photo/Xinhua]

With bonsai trees of various shapes and birds chirping in the garden, Wang Guangming skillfully attaches a twig to the branch of a pine tree before covering it with some cling wrap.

"The cling wrap cover is a new grafting technique that I have developed, which helps reduce the tree's growth time and creates more design possibilities," says Wang, 67, a farmer who has been growing bonsai trees for over 50 years in the Guzhuang community of Rugao city in East China's Jiangsu province.

"I'm not afraid that others will steal the technique from me. There's a lot behind it. Picking the right timing with the perfect temperature and humidity relies on years of experience," he says.

People in Rugao have traditionally grown bonsai trees, with the practice possibly dating back to the Tang Dynasty (618-907).Growing bonsai trees has changed Wang's life over the years.

"The alkaline soil here didn't produce a high grain yield, and we weren't even able to feed ourselves back in the early 1970s," he recalls.

The bonsai trees are therefore described by locals as the "green bank".

"Even if you don't sell a certain tree this year, you don't have to worry. You can sell it for a higher price later when it grows into a bigger tree with a better design," he says. 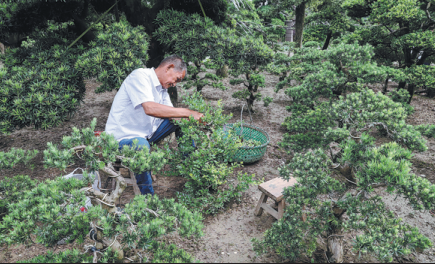 Now, Wang earns between 1.5 to 2 million yuan every year. "Growing bonsai trees is like drawing. It's an art," he says.

The younger generation is also joining the trade.

Liu Xiaofei, 35, started his bonsai business in 2007. "My parents grew bonsai trees when I was little, so I developed an interest at an early age.

"Big trees have a limited number of buyers. They take longer to grow and have a higher price," he says. "So I decided to make miniature bonsai trees, which are easier to grow and therefore cost less. Moreover, small ones are more convenient to carry."

Last year, his company sold about 200,000 miniature bonsai trees. He is also creating ways of selling the trees through livestreams and developing a phone app to connect farmers and buyers across the country.

The bonsai trees have also brought tourists to the community in recent years. Last year, the Guzhuang community gained over 250 million yuan from tourism.

"You're not rich enough if you earn 1 million yuan. A rich farmer in Guzhuang has the aim of earning at least 10 million," says Zhu Songhui, Party chief of the community. "The bonsai tree is a cash cow for us, and we'll work harder to lead a better life."