In the Communist Party of China Admission Oath, there are a few lines that inspired 30-year-old Liu Zhongdi, a doctor from Peking University People’s Hospital, to risk his life fighting COVID-19 in Wuhan soon after the outbreak emerged.

“It is my desire to join the Communist Party of China (CPC), and to be ready at all times to sacrifice my all for the Party and the people,” vowed Liu when he signed up to join a medical team dispatched to Wuhan to support the overwhelmed local medical systems, as the unknown virus had by then killed hundreds of people, spreading fear across the country.

July 1 this year marks the 99th anniversary of the CPC. A few months earlier, Liu, along with 142 Party members who are also doctors and nurses from Peking University medical team, made good on their promises to the people, and embarked on a journey that they will remember their whole lives. 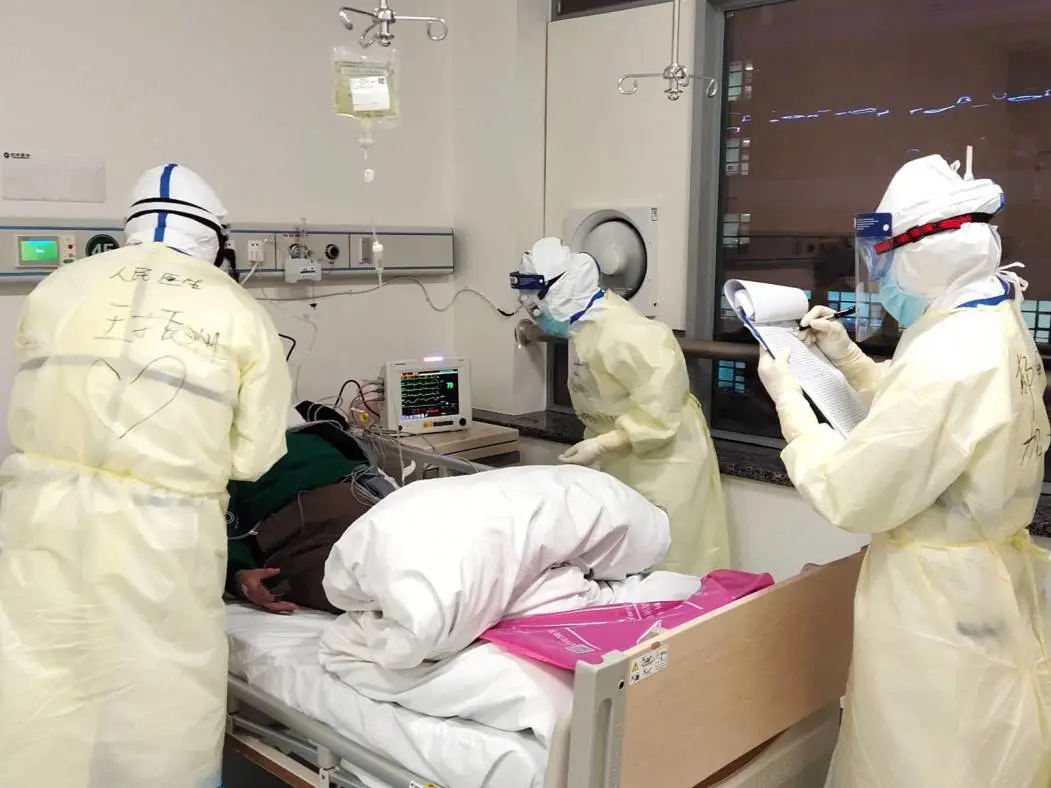 Overworked, doctors in Wuhan risked their lives to save COVID-19 patients.

Two months after Liu’s medical service in Wuhan, he can still remember his first COVID-19 patients. Old and frail, and suffering from severe respiratory failure, most patients were barely able to communicate with him. Though he was told to keep a distance from the patients, sometimes he had to put his ears against their lips to hear what they were saying.

“Hearing their stories of suffering, and knowing that their loved ones had either died or were in isolation wards made me very upset. I tried my best to not let my emotions cloud my judgment, but it was just too hard,” said Liu.

To get inside the ICU wards, doctors had to wear several layers of protective clothing, and had to go through five doors and four medical buffer areas. Overworked and exhausted, they put their own lives at risk to tackle the virus and save others.

Jin Han, a cardiologist, had a terrifying experience when treating a patient in critical condition. The patient took off his mask and had a violent coughing fit, exhaling droplets everywhere in the operating room. Without time to think, Jin and his colleagues gave the patient prompt treatment, only realising the seriousness of the situation afterwards.

“I decided to come to Wuhan two months after my son was born. I know I would have regretted it if I didn’t fight on the frontline, though I feel quite sorry for my family. But I think my boy will be so proud of me, a doctor who came to aid those in need,” said Jin.

During Liu’s 70 days of service in Wuhan, the Peking University People’s Hospital medical team saved countless lives, with a cure rate of 96 percent. Seventy-six days after the city’s lockdown, people in Wuhan were finally able to go out and enjoy the fresh air. Eighteen days later, the city’s COVID-19 cases had dropped to zero. Though the pandemic situation is still fluctuating, the city is no longer an epicenter, and no longer dangerous.

Not every Party member who fought on the front line was as lucky as Liu and Jin, who had the chance to return to their families and share their experience and happiness with them. Many Party members sacrificed their lives in fighting the lethal virus, proving their loyalty to the Party and the people.

Despite his poor health, Dai Shengwei, vice headmaster of Wuhan No.17 Middle School, became a volunteer providing assistance to medical professionals from the Inner Mongolia Autonomous Region. Even though his colleagues tried to persuade him not to, he insisted that he was a Party member and it was his duty to do so. He worked hard for 41 days, and died at the age of 51, the day before the medical team were to return home.

Dai’s wife’s expressed concerns about her husband in her diary. “He is the backbone of our whole family. I really don’t want him to go, but everyone is working so hard for Wuhan, we should too. He doesn’t want me to send him off, so I stood by the window watching him leave, hoping he could come back safe, and everyone can be safe.” Dai kept his promise as a Party member, but failed his wife.

In addition to fighting the pandemic on the frontline, CPC members across the nation have contributed to the cause in different ways. As of March 28, over 79 million members of the CPC voluntarily made donations totaling 8.26 billion yuan (about 1.17 billion U.S. dollars) for prevention and control of the novel coronavirus disease (COVID-19) . The donation campaign is still underway.

According to Liu, it was a doctor’s sense of responsibility and a Party member’s sense of duty that encouraged him to devote himself to the fight against COVID-19. Even though it has been years since he joined the CPC, the 80-character oath is still etched deeply in his heart.

“To sacrifice my all for the Party and the people, that’s my sole promise,” he added. Lou Afang, a young nurse from Peking University People’s Hospital, who became a Party member during her service in Wuhan.

The stories of Party members fighting COVID-19 have inspired many to apply for Party membership. During the pandemic, 440,000 people applied to become Party members, and 25,000 of them were approved. Among the new Party members, 32.8 percent were young people born after 1990.

In March, when the pandemic was at its peak, 34 young Party members from the medical team sent by Peking University to Wuhan wrote a letter to Chinese President Xi Jinping, who is also general secretary of the Communist Party of China Central Committee, to report their work on the front line, and express their determination to continue to fulfil their roles as Party members in winning the battle.

On the frontline to fight the virus, 14 doctors and nurses from Peking University People's Hospital applied to become Party members.

In his reply letter, Xi encouraged the young medics fighting COVID-19 on the front line to make their contributions in places where the Party and the people need them most.

Commending their fearless contribution to containing the virus, Xi said they had demonstrated through their deeds that the Chinese youth of the new era could be entrusted with great missions.

“I was still young when SARS took place in 2003, but now I’ve grown up and it’s time for me to take the responsibility to protect the people,” said Lou Afang, a young nurse from Peking University People’s Hospital. Lou became a Party member during her service in Wuhan.

“I’ve joined the Party on the frontline, which is both an honor and a responsibility. I will work hard in the future, and will always be ready to serve the people,” said Lou.