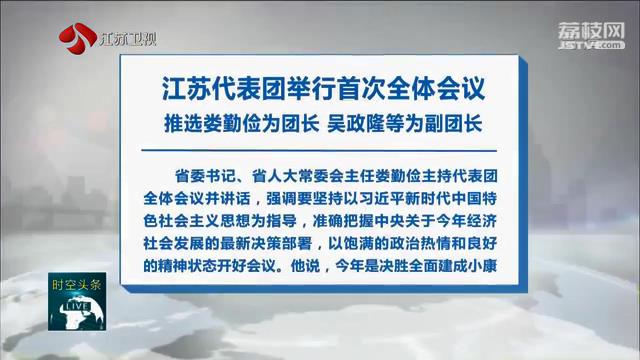 When presiding over the plenary meeting and delivering a speech, Lou Qinjian, secretary of the CPC Jiangsu Provincial Committee and Director of the Standing Committee of the Provincial People’s Congress, emphasized that efforts should be made to adhere to the guidance of the Xi Jinping Thought on socialism with Chinese characteristics for a new era and grasp the central government’s latest decision on economic and social development for this year so as to ensure the success of the annual session of the National People’s Congress with political enthusiasm .

The CPC provincial chief asked the NPC deputies from Jiangsu to follow the analysis and judgment on the current situation made by the CPC Central Committee and the coordinated efforts for epidemic prevention and control and social and economic development.

With the unity of CPC leadership, the position of the people as masters of the country and the rule of law, the NPC deputies are entrusted with a strong sense of political responsibility and historical mission to perform the duties and responsibilities in accordance with the law to ensure the completion of the missions and the tasks, said Lou.

Delegations of the deputies to the 13th National People's Congress or NPC, China's national legislature, have all registered for the NPC annual session scheduled to open on Friday in Beijing.

Preparations for the third session of the 13th NPC have been completed, according to the press center of the session.