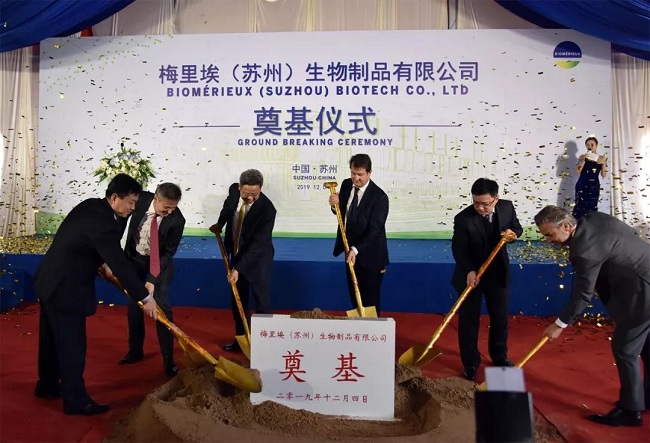 Representatives from Suzhou New District and bioMérieux Corporate lay a foundation for bioMérieux's IVD products manufacturing base in the district on Dec 4. [Photo/WeChat account: snd-szgxqfb]

With an investment of 460 million yuan ($65.25 million), the first phase of bioMérieux (Suzhou) Biotech Co, also a research and development base, is projected to yield 300 million yuan annually after being put into service in 2023.

Li said he hoped that bioMérieux will be involved in further cooperation with Suzhou in the future.

Alexandre Mérieux, president of bioMérieux, said he is looking forward to doing business in Suzhou and highlighted the city's importance in the company's China expansion strategy.

Founded in 1963, the France-based bioMérieux Corporate is one of the 10 leading companies in the field of in vitro diagnostics worldwide and also the largest biological agent company in France.

bioMérieux develops and produces in vitro diagnostic solutions for private and hospital laboratories, mainly for the diagnosis of infectious diseases, with its operations in more than 150 countries. In 2018, its sales revenue reached 2.42 billion euros ($2.68 billion).

Since it started operations in China in 1991, bioMérieux has always practiced its principle "in China, for China and with China". Last year, its founder, Alain Mérieux, was awarded the China Reform Friendship Medal by the State Council for his contributions to China's reform and opening up.