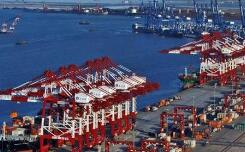 East China’s Jiangsu province has witnessed rising port throughput since the start of this year by opening new shipping lanes and adjusting cargo source structures so as to offset the intensified regional competition, Sino-US trade friction and other adverse effects.

The Tonghai dockland in Nantong Port celebrated its one year of pilot operation on June 30. With a new vessel calling at the dockland to unload 1100 TEUs, the dockland had reported a total throughput of 100000 TUEs in June, setting a new monthly high for three months in a row since the beginning of the year.

Restrained by the collecting and dispatching system, Nantong Port had reached the ceiling in its port throughput.

With the new port relocated from the urban area to the Langshan Dockland in 2018 for ecological conservation purpose, the port has made historic breakthroughs in its throughput.

In the first half of this year, the Tonghai Dockland saw its TEU throughput rising 48.9% from a year ago. Driven by the growth momentum, Nantong Port handled 653900 TEUs in the first six months of the year, up 56.5% year on year.

The Taicang Port has intensified its ocean-going transport of cargo to 30 Belt and Road countries and opened up 152 new shipping lanes.

The port has forged partnership with other ports in the country to open up new shipping lanes. In the first half of this year, Taicang Port ranked first in the province in the TEU throughput, up 5% from a year ago.

In the meantime, major ports in the province have targeting the market changes and adjusted the source structure of cargo.

The Lianyungang Port has increased the shipment of coal, laterite nickel ore, bauxite, steel, and equipment. In the first half of this year, the port exported 24,160 vehicles, up 186% from the same period of last year. The Changshu Port registered an obvious increase in the export of coal, steel, mining materials, chemical raw materials and finished products. The Zhangjiagang Port registered the import and export of 4214 vehicles, totaling 3.4 billion yuan of sales in the first half of this year. At the same time, it continued to increase the export of copper concentrate and wind power towers for diversified operation.