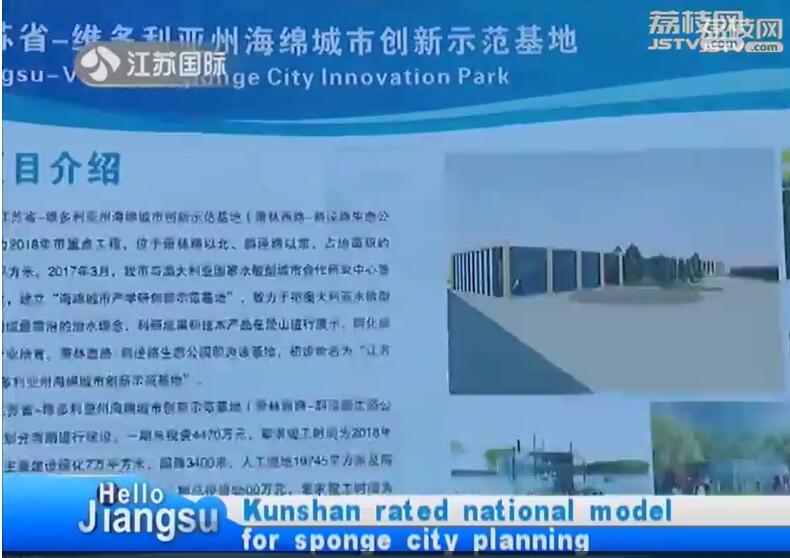 The county level city of Kunshan in Jiangsu province has been rated a national model for sponge city planning, according to a notice issued by the Ministry of Housing and Urban-Rural Development.

An urban community in Kunshan is trying its best to create a sponge system. Rainwater collection ponds covered with aquatic plants are arranged on both sides of the road. Nearly 5,000 square meters have been set aside for bio-retention ponds and constructed wetlands in the entire community. The rainwater collected on the roof and road will enter these collection pools where it is absorbed and purified by the aquatic plants and nitrogen and phosphorus before re-entering the terminal reservoir.

Kunshan Zhonghuan Expressway is an elevated expressway that is the first of its kind in China to have pioneered the use of sponge city technology. Eco-retention system was designed in the road landscape belt under the viaduct. A 1.5-meter-wide and 15-meter-long bio-residue pool and was built at an interval of every few hundred meters. Along the 44.2-kilometer Central Expressway, a total of 786 such retention devices were installed.

The recent launch of the Jiangsu-Victoria Sponge City Innovation Demonstration Base, with a total investment of nearly 100 million yuan, will promote Australia’s experience and practices in Jiangsu.

The Chinese government is building water-absorbent projects in 30 cities as part of its "sponge city initiative." Many of the projects incorporate green space, like wetlands and bioswales, which naturally help absorb water. The efforts seek to reduce the amount of rainwater runoff.

Launched in 2015, the Sponge City Initiative invests in projects that aim to soak up floodwater. The projects are being built in 30 cities, including Shanghai, Wuhan, and Xiamen. By 2020, China hopes that 80% of its urban areas will absorb and re-use at least 70% of rainwater.

To date, the cities have received more than $12 billion for sponge projects, according to China Daily. The central government funds around 15% to 20% of costs, with the remainder funded by local governments and private developers.