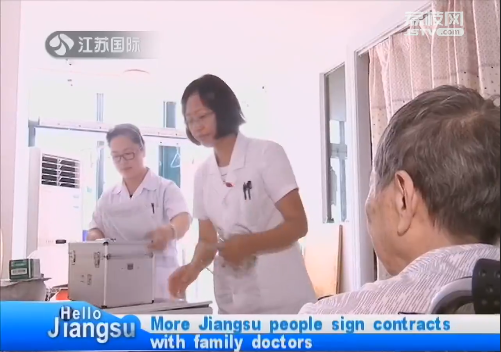 East China’s Jiangsu province is planning to extend family doctor services to the entire population by 2020 and ensure more convenient health services for residents who have signed contracts with family doctors.

Since the start of this year, Jiangsu has stepped up its efforts for the signing of family doctors to ensure that the family doctor system will play the role of booster for the promotion of the hierarchical medical system to improve services at county- and township-level health centers, especially in less-developed areas.

Six teams of general practitioners with the Xishanqiao Community Healthcare Center of Yuhuatai district in Nanjing have reached out to some 58000 residents in eight communities.

In order to improve the efficiency and quality of the contracted service, the community hospitals have divided the residents into the priority group and the ordinary group. The hospitals will take the initiatives to sign with the priority group that include residents aged 65 and over, children less than 6 years old, low income family, families bereft of their only child and some others needy people. Residents of the ordinary group will make voluntary decision on the signing.

In the meantime, authorities in Yuhuatai district have recently launched a community-based app to reach out to 7 community healthcare centers and 37 teams of family doctors.

All the family doctors are granted the privilege to register for specialists at comprehensive hospitals once they are confronted with incurable diseases.

The provincial authorities have rested on the signing of family doctors as the booster for the promotion of the hierarchical medical system. Greater efforts have been made to increase financial input, strengthen medical partnership and the backup of scientific personnel for the system of family doctors reach out to more people.

As of September, 97% of the community healthcare centers and township hospitals and 82% of the village clinics have fulfilled the signing process with 251.2 million residents signed for family doctor service, constituting 31.4% of the province’s entire population and ranking first in the country.

Twenty seven provinces, autonomous regions and municipalities across China have issued guidelines or plans for promoting family doctor services, according to the country’s top health authority.

By the end of 2016, 22.2 percent of Chinese citizens and 38.8 percent of priority groups enjoyed services from family doctors in cities that piloted the program, the National Health and Family Planning Commission announced recently.

Priority groups are seniors, pregnant women, children, the disabled, patients with chronic diseases such as hypertension, diabetes and tuberculosis, as well as those with severe mental disorders.

Family doctor services will be extended to over 85 percent of Chinese cities, covering 30 percent of the urban population and over 60 percent of priority groups in 2017.

The program is key to establishing a tiered disease treatment system, which means medical institutions receive patients according to the severity of their illnesses.

To attract more family doctors, the government will also facilitate the transfer of patients with more advanced conditions to major hospitals, according to an official with the commission.