Nanjing Lukou International Airport Co., Ltd. was officially renamed Eastern Airport Group Co., Ltd. on August 29 according to the information from the State Administration for Industry and Commerce. The registered capital increased from 7.5 billion to 12 billion. 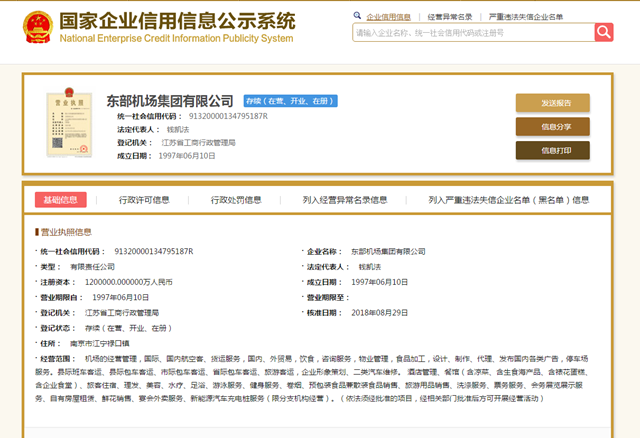 The registered capital increasing nearly 10 billion within a year

From statistics released from the "National Enterprise Credit Information Publicity System" on December 21 last year, the total investment of Nanjing Lukou International Airport Co., Ltd. changed from 2.46 billion yuan to 7.5 billion yuan. With the capital being added this time, its registered capital increased by nearly 10 billion within a year.

As early as July 30, when Lu Yongquan, Head of Jiangsu Provincial Department of Transport received an interview, said that Jiangsu would actively promote the airport management system reform, and strive for the establishment of the airport group in the third quarter relying on the integration of the provincial airport.

There are nine civil aviation airports in Jiangsu Province at present, and all these nine airports were opened to public and becoming first-class airports in 2017. In the first half of this year, these airports saw a total of 246000 flights, up 13.2 percent from a year earlier. Passenger throughput was 2.471 million, up 19% year-on-year. The throughput of cargo mail is 277000 tons, up 6.8 percent year-on-year.

It is understood that seven other small airports are also trying to increase the rate of implementation of flight plans through efforts, with the passenger throughput being 7.548 million, up 38.5 per cent year-on-year, and passenger traffic accounted for 30.5 per cent of the province, up 4.3 percentage points from last year. Passenger traffic in Yancheng Nanyang, Lianyungang Baitafu, Nantong Xingdong, Yangzhou, Taizhou, Xuzhou Guanyin Airport has all achieved rapid growth with 58.1 percent, 57.3 percent, 45.9 percent, 35.3 percent and 34.0 percent respectively year-on-year. Among them, passenger transport growth rate of Yancheng Nanyang, Lianyungang Baitafu respectively ranked 3rd and 4th in east China.