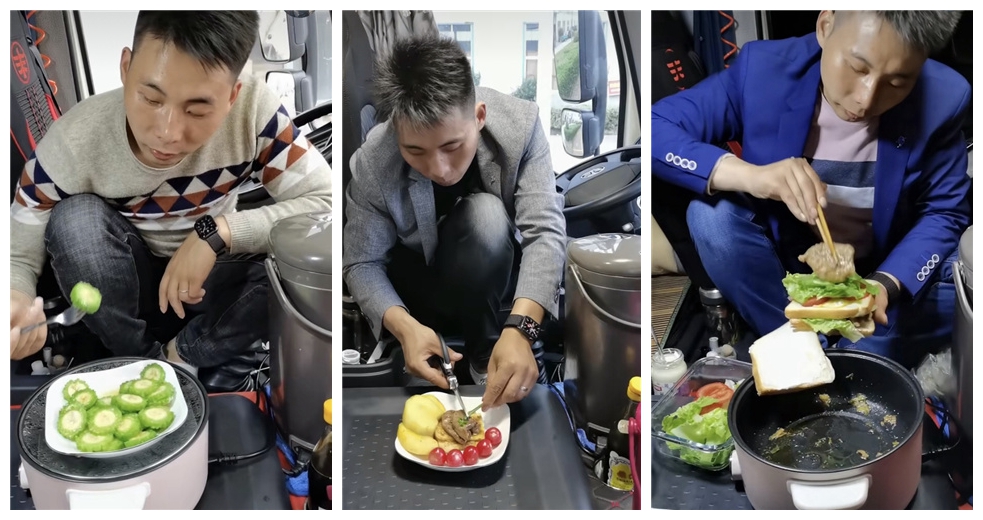 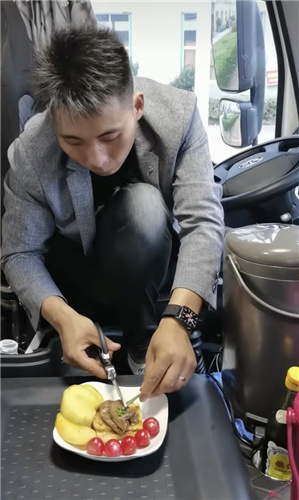 A screenshot of Shi Chuanhai, a truck driver from Suzhou, Jiangsu province, preparing delicious food in his vehicle. He has posted more than 200 videos online of his culinary skills since last year. [Photo provided to China Daily]

This is fast food, but not as we know it. It is cooked on the road, by a man, you could say, who is driven by ambition.

Shi Chuanhai, 32, is a driver and he prepares meals in his truck cab.

His recipes range from exotic cuisine, such as seared foie gras, pineapple fried rice and Oreo pudding to classical Chinese cuisine like stewed pork with vermicelli.

On short video-sharing platform Douyin, also known as TikTok, his culinary skills have attracted more than 1 million followers, who call him "the solitary gourmet", due to his similarity to the protagonist of Japanese TV series Solitary Gourmet. Both of them eat alone and speak with few words.

"Cooking is my way to deal with loneliness," he says. Since March, he only has a dog for company.

A major challenge facing truck drivers is the loneliness that comes with the job. With his family in Anhui province, Shi works for a furniture company in Suzhou, Jiangsu province.

"I spend less than 10 days every year with my family. The rest of the time I am on the road alone," the father of two girls says.

This is also the reason why, last year, he opened accounts on Douyin and Kuaishou－to get connected with people. He has posted about 200 videos about his truck-cooking life.

In these videos, Shi is always dressed neatly and keeps his mobile kitchen clean. There is no evidence of messy rings of oil, dried vegetables or bread crumbs. Some viewers joke that "it is not a real truck, but a truck-shaped kitchen", while some even question his identity as a driver.

In Shi's eyes, some viewers have a preconception that all truck drivers are covered in oil with dirty hands.

"Staying long hours in cabs, we use our trucks as our home," Shi says, adding that he thoroughly washes his truck after each long-distance journey.

Shi used to eat in roadside cafes. But he wanted to save money and maintain a healthy diet. He started cooking on the road last year. 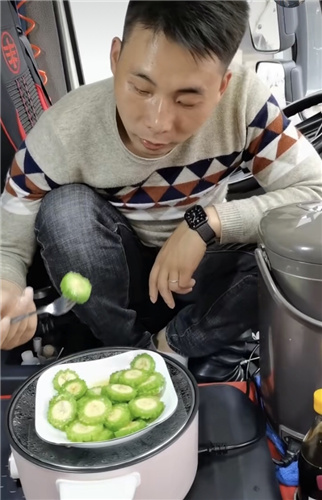 He bought the required appliances, including a mini refrigerator, a rice cooker and a mini oven.

In a video this month, Shi tries fried fish in his cab. Using a pair of scissors to cut and gut the fish, he marinates it and then puts it in a pan with onions. Then he adds garlic, and red pepper flakes in oil.

The sizzling fish is mouth-watering.

"You live a poetic life out of everyday boredom," a Douyin user comments on the video.

For Shi, this is life which he doesn't have much of a choice and it is not poetic at all. In 2018, Shi went into business with friends but it failed and he owes a bank tens of thousands of yuan.

With his wife a stay-at-home mother, Shi is the sole breadwinner in the family.

To pay for the loan, he became a long-haul trucker.

On most days, Shi gets up at 7 or 8 am in his truck and drives until midnight, with three meals prepared in the cab.

Although his more than 1 million followers on Douyin can help him earn money quickly via advertisements from multichannel networks and appliance or cosmetic brands, Shi has rejected the idea because he worries about product quality.

"I also want to make money to pay off my debt, but I must be honest with my followers, who I take as friends," Shi says.

The only product he sold was apples in an orchard in Hebei province, the sales of which have been affected by the COVID-19 pandemic.

"Through my social media account, I just want to help more people in need," Shi says.